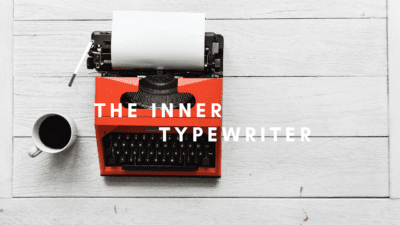 I recently had the pleasure of being interviewed by Scott Calhoun for his youtube series, The Inner Typewriter. Scott is a collector of vintage typewriters and a lover of books. He’s managed to combine his two interests into a quirky interview format.

To see his interview of me, visit https://www.youtube.com/watch?v=8katZsyqytY. And if you’re as curious about Scott as I was, read on.

Me: What was the inspiration behind The Inner Typewriter? How long have you been hosting it?

Scott: I’d been working at a television station for nine years, always helping others to create their own shows, but never working on anything that was my own. Finally, I realized it would be a travesty if I never did anything creative for myself, so I asked myself: what would I really enjoy doing a show about? That’s when I got the idea of the struggling writer. I envisioned that I, as the host, would embody the frustrated writer, and my guests on the show would be those authors who were successful, who could share their wisdom and help me (us) get out of that creative dry spell

After some more brainstorming and ample help from my wife (a VP of public relations), we changed the idea from the negative icon of a struggling writer to something more positive, almost spiritual; the typewriter itself. Not just the manmade writing machine itself, but the inner writing machine that we have in our hearts and minds. The classic typewriter has no delete key, so it dares us to really think about what we want to write, and then take that leap of faith. It’s pure, sincere creation. And discovering that in yourself and unlocking it (“find your inner typewriter”) was a much more powerful and uplifting idea than the down-on-his-luck paperback writer drowning in his own discarded drafts.

I did my first filming in September 2018, starting with some friends as interview guests.  Pretty soon I was getting more recommendations for authors to interview, more and more and more until I had to start booking the studio once a month to keep up with demand!

Me: You clearly enjoy interviewing people, which puts them at ease. Any tips for people who may not be comfortable in front of the camera

Scott: Nearly every guest (or ‘talent’ as we call them) walking into the studio for the first time is a little jumpy.  The beady eye of the camera lens staring at you, unblinking–of course, it’s unnerving. So the first thing to realize is that this reaction is perfectly natural. Once you acknowledge that it’s ok to feel uncomfortable, you’ll start to adapt to it. The worst thing you could do is not accept your own anxiety.

I do have a few easy tips to offer. If it’s a talk show style interview like The Inner Typewriter, just ignore the cameras. Pretend it’s a real conversation (and hey, it IS a real conversation!) and you are just there to chat. Usually, the host will have shared questions ahead of time, and they’re going to ask you questions that you are comfortable answering. If not, just request them not to ask those uncomfortable questions. This isn’t testifying before Congress, after all.

Another tip is don’t fidget. Do some calming exercises before the show starts. If you are a meditator or have a mantra, good for you: that’s a great technique for ‘getting in the zone.’  If your chair is uncomfortable, ask the crew to give you a different one, or for a pillow. It’s not too much to ask; on the contrary, you HAVE to speak up for yourself. Same thing goes for room temperature, using the bathroom, and having something to soothe your throat like a glass of water. Physically uncomfortable guests are hard to watch simply because the audience notices right away that you can’t get comfortable, and they can’t help but sympathize with you.

Make sure you see what you are going to look like on TV. Usually, show hosts will point to a monitor where you can see yourself. If you don’t like the lighting or framing, ask them to fix it. There’s an upper limit of what they can do, of course, but you need to feel good about how your image is translating into the digital world. BUT ask them to turn the monitor off when the show starts recording. People tend to look at themselves–a normal instinct–but it’s distracting and can make it look like you aren’t really present.

One of the major stress points of doing a TV interview is the thought ‘What if I mess up?’ Or ‘What if I say something stupid?’ Well, all you have to do is recognize when you mess up, and say, ‘Let me start that comment over.’  Or if you say something you regret, just say so immediately. ‘I regret how I phrased that. Please don’t include that in the final edit.  Allow me to start over.’  TV production people are familiar with the editing process, and it’s quite easy to cut out an awkward flub.

Of course, you can’t do that with live TV, but I wouldn’t recommend your first TV appearance be live. You should get proper media training first, and ideally have done several ‘taped’ interviews to get used to the strange environment that is video production.

Me: What have you learned from interviewing writers?

Scott: Oh my gosh, all sorts of things. It’s just like having conversations with people in a cafe, except I can go back and review what they said at any time, on demand. I’ve learned that many of my questions about the method have very straightforward answers.  For instance: When you write a mystery, do you know the killer ahead of time, or do you figure it out with your protagonist along the way? Well, some do it one way, some do it the other. So try them both and stick with the one that works best for you.

Other things I’ve learned weren’t so intuitive. They were downright surprising. I was shocked to learn that there were so many kinds of editors (developmental, managing, content, copy, literary, etc.). So I can’t just have one show on editing. I’ll need to have a different show for each kind!

Everyone has had different experiences and has found themselves becoming a writer in different ways. That journey is always interesting to me.

Me: Tell us about the book you’re working on.

Scott: My first novel took ten years to write, and I finally finished it in one Herculean push at the end of 2017. The next book I wrote came much faster.  The truth is, I learned so much from writing the first one that the second one was much more accessible.  I started my second novel in October of 2018 and I was done by February. Not bad for over 70,000 words!

It’s fiction, and the genre is ‘magical realism.’  I love this subtype because it takes me out of my everyday world (so predictable and unapologetically real) and takes me somewhere that looks familiar, except there’s something odd. Something that doesn’t quite fit. Maybe it’s magical, or maybe it’s just bizarre. But the story doesn’t focus on it too closely; it acts as if this is normal. I love that; the normalization of the strange.  It reminds us that there’s more to the world than at first meets the eye.

I guess I’m just still in the post-writing glow of literary completion.  But it wouldn’t give anything away to say that it has similarities to the movie Inception, and it’s also rather Kafkaesque. Stay tuned!  Maybe I’ll be announcing some good news soon!  Fingers crossed…